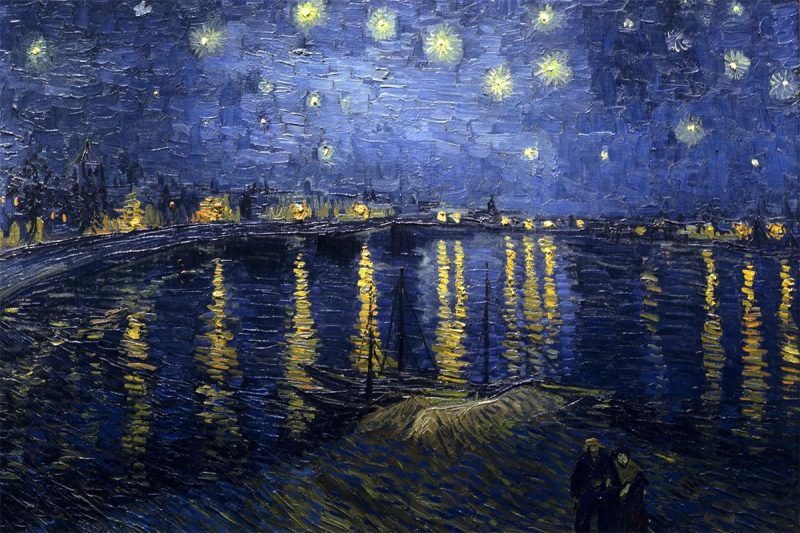 The words “starry night” invoke the image of one of Van Gogh’s most well-known paintings – a cypress tree painted against a background of midnight blue pocked by swirling stars grows into the mind.  However, this is not the only starry night that Van Gogh created.  In 1888, Van Gogh painted Starry Night Over the Rhône.

A quick geography lesson: the Rhône river begins in the Swiss Alps.  Its mouth is in the Mediterranean Sea.  It winds its way through southern France before splitting at Arles into two different rivers, the Big Rhône and the Little Rhône, to form the Camargue delta. It played a large role in the life of Arlésians, being a source of trade and travel.  It was only natural that Van Gogh would want to feature it, given his interest in painting nature. 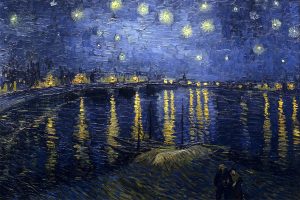 Starry Night Over the Rhône by Vincent Van Gogh

Starry Night Over the Rhône is one of his better known paintings, yet it is often confused with the more famous Starry Night.  However, when it is seen, it is immediately recognizable as a Van Gogh.  The name is the only trouble.  The piece is oil on canvas, 24 in x 18 in, likely finished some time in September of 1888 as that is when he sent a letter to Theo with a sketch of the painting.  The Musée d’Orsay in Paris currently has it listed in their collection.

Starry Night Over the Rhône was part of Van Gogh’s study of night paintings, where he obsessed at painting during the night.  He described his process and the painting to Theo in a letter:

“…the starry sky at last, actually painted at night, under a gas-lamp.  The sky is green-blue, the water is royal blue, the areas of land are mauve. The town is blue and violet. The gaslight is yellow, and its reflections are red gold and go right down to green bronze. Against the green-blue field of the sky the Great Bear has a green and pink sparkle whose discreet paleness contrasts with the harsh gold of the gaslight. Two small coloured figures of lovers in the foreground.”

Much like Café Terrace at Night, Van Gogh gathered his paints, canvas, brushes, easel, and chair to find a good spot to paint, only he did it with a gas lamp as well this time.  His dedication to his work is evident, not just in the distances he walked or in the conditions he painted.  Here it is seen in his words.  He carefully details each color used.  Color was painting to Van Gogh.  Choosing the wrong color would led to the wrong message, the wrong feeling that he wanted to capture.  With color, he invited others to share the hours spent painting diligently in his chair.  In sharp contrast, Van Gogh barely mentions the couple walking along the edge of the foreground.  Humans are not the focus of this piece; they are peripheral.  This letter further drives homes that this view of the sky is what he wanted people to see.

Starry Night Over the Rhône does not have the same inviting warmth that Café Terrace at Night carries.  By no stretch does this mean that the painting is cold or distant.  Instead, it has the feel of a viewer marvelling at the scene before him.  As if Van Gogh had opened his arms wide and shouted, “Look at this view!  You need to see it!”  The figures at the bottom of the right hand corner are small.  They nearly blend into the colors of the ground; it’s easy to overlook them on first glance.  In doing so, Van Gogh emphasizes how grand and awe-inspiring the sky is.  The figures even serve as a contrast to the viewer.  Their backs are turned away from looming sky and lamplit city; they have already seen it or don’t care to look.  They fail to appreciate the beauty created before them, unlike the viewer who can’t help but to look.

This piece is wonderful for how it demonstrates Van Gogh’s love of the natural world.  Instead of sunlit orchards, we find ourselves gazing at the stars and a city whose lights dance along the river like stars.  He found beauty and wonder in mundane views, captured them into magnificent works of art to show us just how amazing our world is.