Given that Vincent van Gogh produced an amazing catalogue of art that numbers in the thousands, it is astonishing that only six have been reported as destroyed.  One of the six was a self-portrait known as The Painter on the Road to Tarascon.

Before its destruction, The Painter on the Road to Tarascon was an oil on canvas painting 48 x 44 cm.  It was housed in the Kaiser-Friedrich Museum of Magdeburg, Germany, currently known as the Kulturhistorisches Museum.  It is believed to be lost in fire from the Allied bombings of Magdeburg during World War II.  However, the  Monuments Men Foundation has it on its “Most Wanted: Works of Art” list.  The Foundation is based on the Monuments, Fine Arts, and Archives section of the Allied armies organized in World War II to preserve and recover art and cultural pieces threatened during the war.  The foundation lists the painting as “missing from the Stassfurt salt mines art repository … on April 12, 1945.” 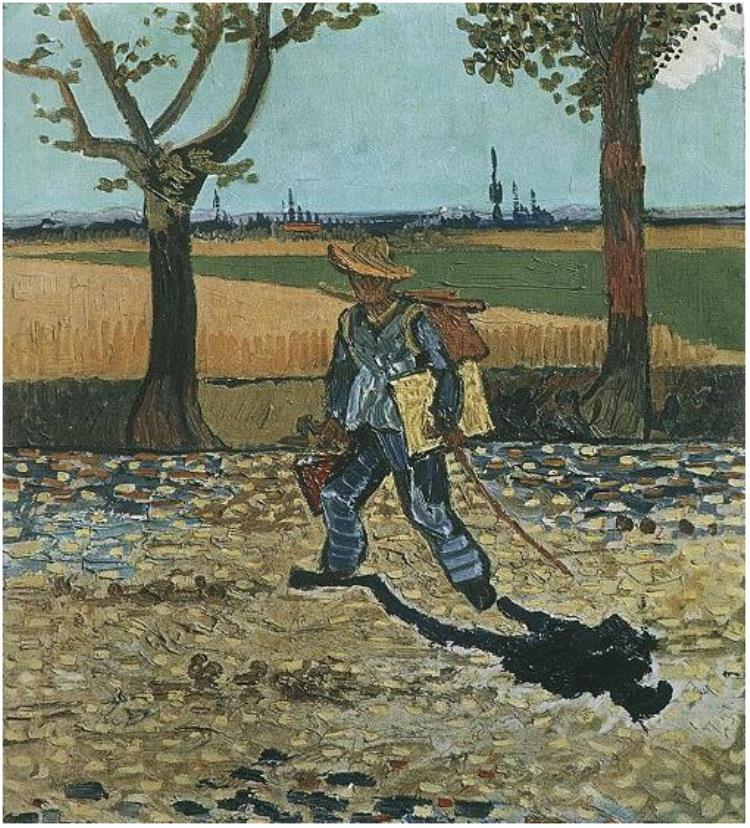 Destroyed Painting, The Painter on His Way to Work

Van Gogh painted it in 1888 during his time in Arles, France.  It is part of several paint studies that he sent to his younger brother Theo in August.  This self-portrait is very different from his others, in which he typically depicted himself as seated with a plainer background, showing only his torso and face.  In this painting, he is full-bodied, trudging along the road to work with his cane and art supplies.  The figure is paused mid-step, suggesting that he stopped his busy pace to see if this was the place to paint.  Much of his painting took place outdoors, travelling from area to area for new subjects.  His face is obscured, giving the impression that he is part of the surrounding countryside.  It is inferred that the figure is Van Gogh by the red hair peeking out below the straw hat.
A point to note is that Van Gogh used the area he called “the road to Tarascon” in several different works, such as Meadow with Flowers and Farmhouse in the Wheat Field.  He also used it in a series of sketches that he sent to fellow artist, John Peter Russell.  Russell was an Australian artist that Van Gogh had met in Paris and with whom he maintained a friendship and exchanged works.  The sketch, now on display at the Guggenheim Museum in New York, was done with pencil and pen, focusing on the same stretch of road used in The Painter on the Road to Tarascon 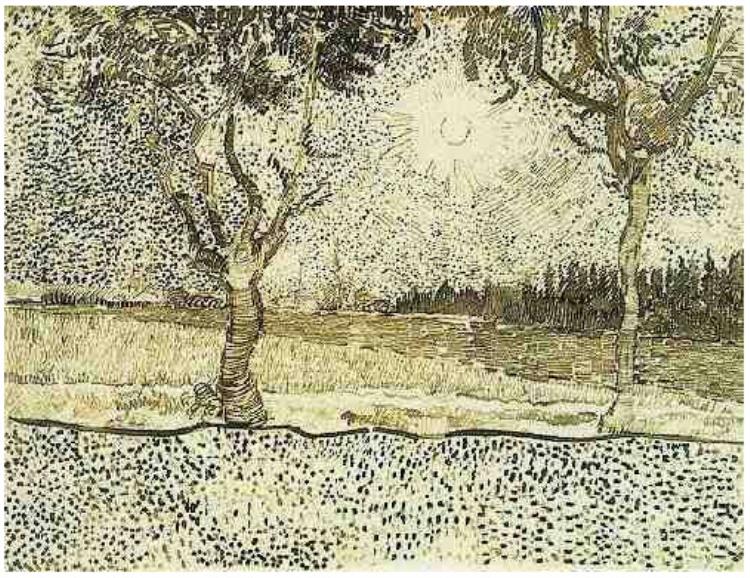 Sketch of The Road to Tarascon

In contrast to the painting, there is no figure walking; it is a landscape sketch.  The sun is shining brightly in the sky while the Van Gogh uses the shadow and bright blue sky to show the sunny weather.  The plants seem more alive in the sketch, as well.  The trees are less rigid than in the painting while the wheat field is comprised of brief lines scratched into differently angled lines.  The sketch has more movement to it.

Another interesting point to this painting that even though it was destroyed, through prints many other artists have created their own reinterpretation.  One of the most famous of these was a series done by the artist Francis Bacon in the 1950s that sees Van Gogh’s artist as an tortured form walking down the road.  It is a dark and intriguing series that adds another perspective to the original piece.

See the Monuments Men Foundation’s “Most Wanted” list for other famous lost and stolen artwork!

And see Francis Bacon’s study of the destroyed work here on the fourth page.